On June 28, 2014, California Governor Jerry Brown signed Assembly Bill No. 2130 into law. This Bill served to repeal and add Section 113961 to the Health and Safety Code. For those of you unfamiliar with Health and Safety Code 113961, also known as AB 1252, I’m referring to that pesky law that went into effect January 1, 2014 which required food employees to wear gloves whenever touching ready-to-eat foods. That’s right folks. The infamous “rubber glove” law has been repealed.

This law had the food and beverage industries up in arms over the requirement that latex gloves be worn whenever handling ready-to-eat food. Generally speaking, this required that any person working in food service, from bartenders to sushi chefs, were required to wear gloves when handling food that did not need to be cooked. I’m talking about everything from rice in your California Roll to mint in your mojito. And foodservice folks were not happy about it. As soon as the law went into effect, the California legislature announced it would be extending a six month grace period before handing out citations for violations of the law. During that time, various petitions were launched to repeal AB 1252, including a change.org petition to exempt bartenders from the law.

One of the biggest complaints regarding AB 1252, was that there was really no hard evidence to support that wearing gloves helped prevent foodborne illness in restaurant/bar patrons. In fact, wearing gloves may actually contribute to foodborne illness, since gloves are not always changed frequently enough, and the moist environment is a perfect breeding ground for bacteria to flourish. Moreover, business owners were concerned about the potential costs and environmental impact of the new single-use rubber glove requirement. In one article, San Diego owner of Polite Provisions, Eric Castro, called the law “an environmental nightmare.”

In response to the public outcry, California Assembly Members Pan and Gatto introduced Assembly Bill 2130. It was a race against the clock to get the bill passed, since the six month grace period only extended until June 30, 2014. After that, California businesses would be stuck with the glove law. Luckily, AB 2130 passed in the Assembly on May 8, 2014, and approved by the Governor on June 28, 2014. Due to the urgency of the nature of the bill, the statute went into effect immediately upon signing.

Although, there is some ambiguity in the new Section as written relating to what constitutes “minimized” contact, this law is much more preferential than the previous law that required all workers wear gloves when handling ready-to-eat foods. If the California Legislature is really worried about foodborne illness in bars and restaurants, they should be focusing their efforts on proper food handling training and certifications, rather than slapping rubber gloves on everyone. At least our bartenders and sushi chefs can rest easier knowing they won’t be dusting our drinks and rolls with latex glove powder. 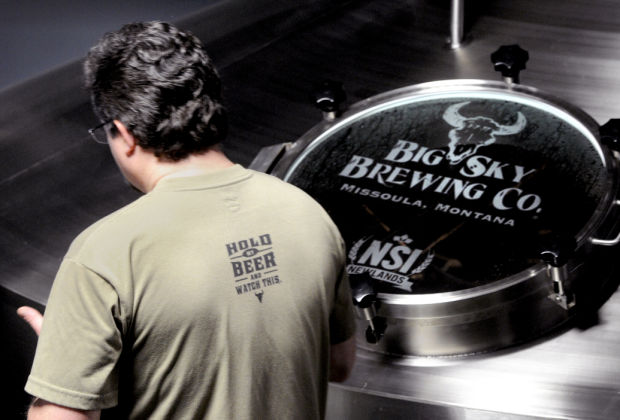 As of January 23, 2014, Missoula, Montana based brewery Big Sky Brewing agreed to drop the lawsuit it filed against  Anheuser Busch for trademark infringement in exchange for Busch removing a YouTube commercial from its channel which featured the saying, “hold my beer and watch this.”

Big Sky Brewing had been using the phrase since 2004 and had the phrase registered as a federal trademark in 2009. While the advertisements were never featured on television, Big Sky nonetheless requested that Busch cease its use of the phrase in its YouTube commercials. Based on comments by Busch’s communication director, there was no financial component to the agreement. It appears Busch simply agreed to pull the YouTube videos in exchange for Big Sky’s voluntarily dismissal.

After reading this article, I was struck by Busch’s acquiescence to simply remove the videos from YouTube in exchange for dismissal of Big Sky’s complaint. I mean, according to that very same article I mentioned above, Big Sky had sold approximately 50,000 barrels of its product in the year 2013. This is a paltry number compared to Busch who sells hundreds of millions of barrels of its product per year. For those who are  unfamiliar with “barrels,” a barrel of beer is typically around 31 gallons. This obviously depends on where you are in the world (the US measures barrels differently than the UK).

What really astounded me was Big Sky’s ability to get a company like Busch to take down a highly-visible ad, when Busch is clearly the majority owner in the market share. Normally, we’re used to seeing large corporations like Busch “muscle” their way out of a lawsuit such as this. And by “muscle,” I mean Busch using its vast wealth to pile paperwork, discovery, and motions onto Big Sky, thereby forcing Big Sky into a settlement. But in this instance, Busch appears to have simply removed the YouTube ads. In reality, the amount Busch spent on the YouTube ads was likely less than the amount it would cost to litigate the matter, so they simply took them down. However, I do believe another factor in Busch removing the YouTube ads was the fact that Big Sky just so happened to have federally registered their slogan, “hold my beer and watch this” as a trademark. In registering their trademark, it gave them a stronger foothold upon which they could bring their suit against Busch for trademark infringement. By having their slogan registered as a trademark, Big Sky was able to bring a lawsuit against Busch for federal trademark infringement and more specifically false designation of origin by way of the Lanham Act.

For some clients I have worked with, it can be difficult for them to understand how federal trademark registration can positively impact a business. Registration does not inherently prevent infringement, so why go to all the trouble and cost to register it with the United States Patent and Trademark Office? I often hear clients tell me that because they are not “a big business,” trademark registration will not confer any real benefits to them, and that they will wait until they are “bigger” to protect their intellectual property interests. I believe this Big Sky/Busch case exemplifies how a federally registered trademark can make a big difference, even when going up against a “big player” such as Busch.

Had Big Sky used the “hold my beer and watch this” slogan without registering it with the United States Patent and Trademark Office, I do not believe Busch would have been so willing to take down their YouTube ads. Would Big Sky still have a basis to claim they had superior rights to the phrase than Busch? Sure. But would the claim be as strong? Probably not. While Big Sky could claim common law rights in the mark, it would not have been as strong as their claim for infringement of a registered trademark. Trademark registration provides certain “presumptions” to registrants. For one, registration gives the owner of the trademark the presumption that they were the first to make use of the mark. While that presumption is rebuttable, without registration, you would not be afforded that presumption and would be forced to prove you were the first to make use of the mark in commerce, as well as the owner of the mark. For marks that are not inherently distinctive (read: not unique, descriptive), this can be very difficult to prove.

So, by Big Sky obtaining federal trademark registration for its slogan, they had a stronger basis by which they could sue Busch, and also had a stronger claim they were the owners and first users of that slogan. Thus, it made it easier for Busch to make the decision to “give up” the fight and take the ads down, even though Big Sky was a much smaller company and they probably could have made Big Sky’s business suffer during the pendency of the lawsuit. So, I’ll leave all you business owners out there with this final thought: Do you still think you’re “too small” for trademark protection to be helpful?

How can we help you?